Episode 9 – The History and Design of Springs

For an item that is absolutely indispensable today, there is relatively little recorded history of springs. One of the earliest known uses was the Bronze Age invention of tweezers. They consisted of two strips of metal with a small plate brazed between them. Simple tongs and pincer pliers developed as metal forging techniques improved.

During the Iron Age, tensioned metal became more useful to man. King Tut used leaf springs on his carriages to smooth out the ride and increase their longevity.

Leonardo Da Vinci is credited with the design and manufacture of the first hammer spring for a gun in 1493. It allowed for a gun to be shot single handedly.

British physicist, Robert Hooke, discovered a principle of physics, in 1680, which states that the amount of force (F) required to extend or compress a spring by some distance (X) is linearly proportional to the distance, where the constant (k) represents its stiffness. When pressure is applied, the force developed is known as stress. Deformation as a result of the stress is known as strain. F = kX is the formula known as Hooke’s Law.

Springs in the 18th Century and Beyond

The first coiled spring was invented by R. Tradwell in 1763. It was considered a great improvement over leaf springs because it required less maintenance. It took almost another century to develop steel coil springs, which found their use in chair seats.

In 1943, naval engineer Richard James accidentally discovered Slinky, the world’s most famous coil spring. While working on the development of springs that could support ships’ sensitive instruments and keep them stable in high seas, James knocked one of the coils off a shelf. He watched, fascinated, as it walked down a stack of books, across a table, onto the floor, then recoiled into a neat upright stack.

His wife, Betty, named it “Slinky” because of its smooth, graceful movement. It has been sold as an inexpensive child’s toy for over six decades. Slinkys have been used as musical instruments, radio antennas, and in anti-gravity experiments. They are also used as teaching tools because of their ability to simulate waves.

Spring manufacturing begins with the designing process. Attention must be given to appropriate material with regard to shear modulus and tensile strength of the wire to be used. Working tolerances must be considered when placing springs into components as spring diameters change when loads are applied. Compression springs increase in diameter as compression is applied. Extension springs decrease in diameter when under force. Diameters of torsion springs will increase or decrease under force depending on the direction of winding versus direction of torsion.

Designing springs for manufacture should be based on physical dimension, spring rate, and expected loads of the finished product. Wire used for winding the spring helical should be the appropriate size and substance. The number of active coils must be calculated to achieve adequate load handling capabilities. Thought must also be given to any special tooling that may be necessary to complete the manufacture of the product. Coatings or surface treatments of the wire are options to be considered. They may offer colored outer surfaces, corrosion prevention, wear resistance, or surface hardening qualities to the wire spring metal. Special packaging requirements for long, thin, or slinky springs must be provided so they do not sustain damage in transport.

An ideal way to protect these springs is to surround them with a protective mesh that absorbs shock and allows moisture to evaporate, preventing corrosion. Eagle Pride Supply has a stock of protective mesh sleeves in stock and ready to deliver. 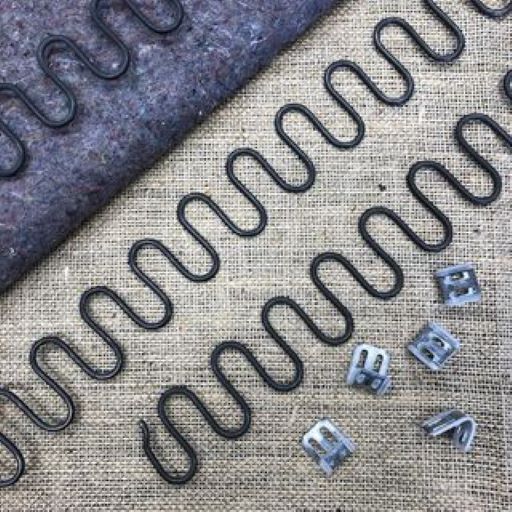