Bolts come in many different sizes, shapes, grades and materials. It is critical to the end user for these to fasten properly, and the best way to prevent damage during shipping from manufacturer/supplier to the assembly point is to put a protective mesh sleeve over the threads of each bolt. Eagle Pride Supply offers the best range of industry standards, strengths, and color coding with our sleeve material.

Named after the shape of their head, were once the industry standard. Now, they’re primarily used for aesthetics, to create a rustic look on buildings.

Used heavily in building and construction. Most often, anchor bolts are found embedded in concrete and 1) anchoring columns and supports to a foundation, or 2) securing traffic signal poles.

Named for their shape-they are bent bolts with threads at both ends. They may be round, square or semi-round and used when suspended items need to be attached to the surface of something. U bolts are common in the construction and automotive industries.

Threaded at one end and have a circular eye at the other, instead of a head. The eye is used to guide a cable, rope or chain for lifting purposes. Eye bolts are common in aircraft construction.

Also named for their shape, a letter J, or half of a U bolt. They are used as cast-in-place anchor bolts and often made of steel or titanium.

Round metal bars with screw threads either at the ends or on the whole thing.

Consist of a taper-headed bolt, lead sleeve, metal cone and a nut. They are used to secure theatre, auditorium, stadium and classroom seating to the floor. They have attachments that expand as the bolt is driven into a surface.

Heavy wood screws that have a hexagonal or square head. Usually, users drive them into wooden beams or posts using a wrench.

Named for the six sides on their head, these fasteners are very common. Made of metal, they have a hexagon head, a shank threaded throughout the length and a washer. They come in many varieties, such as the heavy hex bolt and the hex cap screw. To fasten a hex bolt, use a hex nut.

Pivot mounting shafts that are not threaded all the way up. The threading instead stops before reaching the head, leaving a smooth-sided shaft that is usually a little wider than the threaded part. They can be square or round and are generally made out of stainless steel.

Have a rounded head, but the collar is square, which fits in a hole and prevents twisting when it is being installed. They are primarily used for joining wood.

These bolts have a flat head with a square collar, which keeps them in place when it is tightened. Mostly, they are used with conveyor systems.

These bolts have an integral washer, which helps distribute bearing weight and eliminate the disfigurement of material being bolted.

Industrial bolts that use the metric system as their measuring system. They are used by the international community.

An industrial bolt with a square or hexagonal head. Machine bolts usually range in diameter between ¼ inch and 3 inches.

Can be defined as bolts that pass completely through a layer and bind by way of a nut on the layer’s other side. Thru-bolts are the strongest and most reliable of all types of bolts, making them the bolt of choice for the most heavy-duty of applications. They are capable of withstanding a large amount of weight, and alleviate any safety concerns an application may have. Applications in which thru-bolts are utilized span a multitude of industries, and include rolling shutters, security grills, sun awnings, and garage doors. 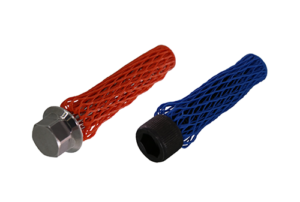